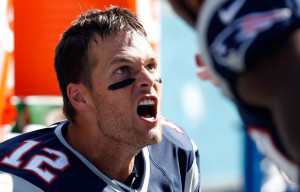 In a moment of rare sports debacle which will certainly go down in history, this last Sunday’s final playoff game between the New England Patriots and the Denver Broncos had the blame of loss squarely placed upon the shoulders of … you guessed it–Tom Brady. Not for the reasons one might expect, such as his relative inability to hit any of his receivers. Alas, the blame of Sunday’s loss is all due to him FORBIDDING Darryl Strawberry to take to the field even once in official gameplay. Darryl was quoted after the game:

It’s okay; I understand, really. He just wanted to be able to say “I got us to the Superbowl by myself…without ‘Superman Strawberry’ (that’s what they call me around here).”

A lone tear dropped to the floor as he continued:

It’s just sad, to me, that he let so many of his fans down today. And not to mention the players like myself on his team. Once they came out of the locker-room they wouldn’t even look him in the eye. It was really sad. I actually felt bad for him. I mean…I don’t want to overshadow him or take all the credit…Brady is a great player. But let me play for the sake of the team, man! Didn’t he want to win?

SportsAreAwesome was one of the first to reveal that Darryl Strawberry joined the Patriots back in December of 2013. Article available here.

Commentators across America agreed that Brady’s decision not to let Strawberry play cost New England the game. It was a virtual windfall, with missed catches, poor fielding, and unnecessary penalties.

Robert Kraft stated after the game his frustrations as well:

Damn him! It’s not called Brady-ball; it’s called football. F**k! He can’t be expected to take the world on his shoulders and refuse to play our new best man just because he’s got an ego. Unforgivable.

At the end of the day, with Brady having no one to blame but himself, he took to the field after the game and shook Manning’s hand. It is rumored that as the handshake took place, Peyton whispered “Thanks for giving us this one and not playing Straws” before releasing his grip.

Coach Belichick informed us that Brady’s getting it from all sides. None of the players would even acknowledge Brady existed all game and some would intentionally drop his passes out of spite. The following video sums up the general sentiments on the team:

Summary: Hubris is a powerful and very real thing. Brady has a lot of growing up to do following the recent loss. And rumor has it: Darryl may have signed a last-second contract to appear on either (or both) teams playing in the upcoming Superbowl XLVIII. More details to follow…